A British man pleaded guilty to manslaughter admited that he beat a female friend to death in Spain, but denied that later he chopped up her body. 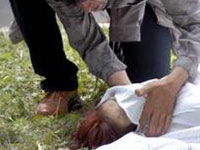 Trial of Paul Durant, of London, lasted 10 minutes. Prosecutors asked Durant if he had killed Karen Durrel in the eastern town of Calpe in 2004 and he said "yes."

They did not ask why and he did not volunteer the information, the national news agency Efe said.

The trial was held in the provincial capital, Alicante. Court papers did not state the defendant's age, Efe said.

Durant admitted to beating Durrel to death in her home, but insisted he left the body there and went away, and does not know what happened to it.

Prosecutors had originally charged Durant with murder and said he had cut up the body and thrown away the pieces.

But after his confession they reduced the charge to manslaughter because no body was found.

They requested a jail term of 12 years, plus three more months because Durant allegedly tried to use one of Durrel's credit cards to withdraw money from an automated teller machine.

The sentencing date was not immediately known.