Old manuscript of Hebrew Bible to be donated to Jerusalem institute

A valuable gift will receive a Jerusalem institute next week. The family of man who held a fragment of a more than 1,000-year-old manuscript of the Hebrew Bible for six decades as a good luck charm will present it to the Institute. 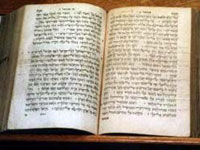 Old manuscript of Hebrew Bible to be donated to Jerusalem institute

The parchment, about "the size of a credit card," is believed to be part of the most authoritative manuscript of the Hebrew Bible, the Aleppo Codex, said Michael Glatzer, academic secretary of the Yad Ben Zvi institute. It contains verses from the Book of Exodus describing the plagues in Egypt, including the words of Moses to Pharaoh, "Let my people go, that they may serve me."

Sam Sabbagh, then a 17-year old Syrian, picked up a piece of the manuscript off the floor of a synagogue in Aleppo, Syria in 1947. The synagogue had been burned the previous day in riots that followed the decision by the United Nations to partition Palestine, a step to creation of the Jewish state of Israel.

Sabbagh, who later immigrated to Brooklyn, New York, carried the parchment around for years in a plastic pouch in his wallet, Glatzer said. He used it as a good luck charm, even bringing it with him when he underwent open heart surgery.

Yad Ben Zvi in Jerusalem is a Jewish studies institute named after Israel's second president, who received the codex when it was smuggled into Israel in 1958. The institute learned of the fragment's existence about 20 ago and attempted to persuade Sabbagh to part with the fragment - to no avail.

After Sabbagh passed away two years ago, his family decided to donate it to the institute.

The recovery "is important in the sense that we are getting the chance to unify the missing parts and put them in their original place," said Michael Maggen, head of paper conservation at the Israel Museum, who will direct restoration of the document.

The codex itself "is not just another manuscript - it's a landmark," largely because it lends insight into important aspects of Hebrew grammar and pronunciation, he said.

Portions of the codex that have already been retrieved are on display in the Shrine of the Book at the Israel Museum in Jerusalem. The Sabbagh fragment would eventually join its counterparts there, Glatzer said.

The codex, also known as the Masoretic Text, was written in Tiberias, next to the Sea of Galilee, in the 10th century and later brought to Jerusalem. It then traveled to Cairo, after which, according to tradition, Moses Maimonides' grandson brought it to Syria. The elder Maimonides was a 12th-century Jewish scholar whose writings and rulings are still followed and studied.

"We have only about 60 percent of the codex - more than a third is still missing," said Aron Dotan, professor of Hebrew and Semitic languages at Tel Aviv University. The missing part includes most of the Torah, or Pentateuch, he said. The codex comprised the books of the Old Testament.

Although only a tiny scrap, the find is still noteworthy, he said.

Glatzer hopes that the parchment's recovery will encourage others to check their safety deposit boxes and attics for similar treasures.

"What (Sabbagh) did, others must have done," he said.