The White House welcomed President Musharraf's determination to continue in February with elections in Pakistan. 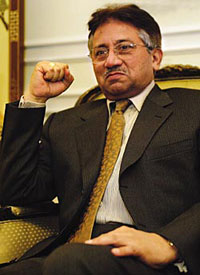 "We think it is a good thing that President Musharraf has clarified the election date for the Pakistani people," press secretary Dana Perino said in a statement given to reporters who were accompanying President George W. Bush on a trip to Texas later Thursday.

The administration issued the statement welcoming the election the day after Bush exhorted the embattled Musharraf in a telephone call to hold elections and to step down as head of the military in the Southwest Asian nation that has been riddled by unrest for the past several days.

"You can't be the president and the head of the military at the same time," Bush said Wednesday, telling reporters about the 20-minute telephone call he had with Musharraf. Said the president: "I had a very frank discussion with him."

The conversation was the first communication the U.S. president had with Musharraf since the Pakistani declared emergency rule last Saturday and granted sweeping powers to authorities to crush political dissent.

In Islamabad Thursday, Musharraf announced after a meeting of his National Security Council that elections would be held in February, a month later than had been planned previously. The announcement, nevertheless, was seen as a signal that the state of emergency would there would not last long security restrictions would likely have to be eased to allow campaigning.

Bush talked about his message to Musharraf as he joined visiting French President Nicolas Sarkozy for a tour Wednesday of the Mount Vernon, Virginia, home of the U.S.'s first president, George Washington.

"My message was very plain, very easy to understand, and that is, the United States wants you to have the elections as scheduled and take your uniform off," he said.

For several days, the administration had faced questions about why Bush was taking a softer line on Pakistan than he did, for instance, against Myanmar where military rulers cracked down on pro-democracy protesters in September.

Bush defended his response to both governments.