German police and their Swiss counterparts have broken up a group that specialized in distributing forged €50 bank notes. Four people arrested. 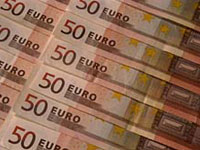 State criminal police in Bavaria said the forged €50 notes - worth about US$72 each at current rates - were of high quality and had been frequently accepted by shops since they started appearing in the southern state early this year.

Searches of the two men's Swiss apartments produced no evidence, but the investigation led police to a 26-year-old Bosnian suspected of organizing the business from Switzerland, a police statement said.

He and his alleged accomplice, a 41-year-old Serbian man, were arrested in the Solothurn region of northern Switzerland on Oct. 23.

The Bosnian already has been handed over to Germany and the Serb is awaiting extradition, German police said. They added that investigations are continuing into who produced the counterfeit money.