Clouds of smoke could be seen on Monday on the deadly Mountain Kelud in Indonesia. Scientists say that the volcano is likely to erupt. 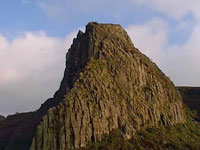 At least two more of Indonesia's approximately 100 active volcanoes also were spewing smoke, with one of them - Anak Krakatoa - firing out red-hot stones and lava as well, illustrating the powerful seismic forces at work in the nation.

But authorities were most worried about Kelud on Java island because of its deadly history, including a 1919 explosion that killed thousands.

The temperature of the crater lake on Mount Kelud was so great that nearby monitoring equipment was no longer working, said Surono, one of 16 volcanologists watching over the peak 24 hours a day.

Despite the threat, there was little sense of panic on Kelud's slopes, witnesses said.

While several thousand people have fled to government shelters, authorities said Sunday that around 25,000 others were ignoring evacuation orders and remained in the danger zone around Kelud.

Officials have made no attempts to prevent people from traveling inside a 10-kilometer (6-mile) zone around the peak that the local government say is off-limits.

"I feel it is OK to stay here," said Sukirno, who was tending papaya plants some 7 kilometers (4 miles) from the peak. "No one can guarantee our safety apart from ourselves."

Kelud has been on the highest alert level for more than two weeks, but since Friday scientists have been warning an eruption may be imminent based on the frequency of tremors shaking the mountain and the temperature of it lake.

In 1990, Mount Kelud spat out red-hot gases, mud and lava that killed more than 30 people and injured hundreds. In 1919, a powerful explosion that reportedly could be heard hundreds of kilometers (miles) away killed at least 5,160.

"If it goes this time, it will be much larger than in 1990," said Surono, basing his prediction on the number of tremors and the lake temperature - both of which have been way higher than in the days preceding the earlier blast.

The team monitoring the volcano have also said an eruption may be small or gradual _ or might not happen at all given the unpredictable nature of the 5,679-foot mountain.

Around 70 kilometers (40 miles) southeast of Kelud, Mount Semeru was also putting on a display, sending out ash clouds high into the air, witnesses said. The peak was on the second highest alert, meaning no evacuations are ordered.

Anak Krakatoa off the northern tip of Java island was spitting out hot stones and lava as well as rolling clouds of ash, television footage showed. It was also on the second highest alert.

The volcano, which in English means "Krakatoa's Child," was formed after the massive eruption of Krakatoa volcano in 1883. That blast was heard nearly 2,000 miles (3,200 kilometers) away in Australia and sent surges of gas and burning ash which, combined with a tsunami, killed at least 36,000 people.

Indonesia is spread across 17,500 islands and is prone to volcanic eruptions and earthquakes because of its location within the so-called "Ring of Fire" - a series of fault lines stretching from the Western Hemisphere through Japan and Southeast Asia .