A glass skyscraper will appear in a neighborhood that was the heart of the Warsaw Ghetto during World War II, said Poland's Jewish leaders. 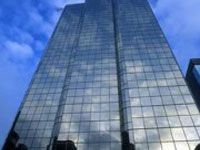 The building - projected to rise 207 meters (680 feet) high - would tower over the elegant Nozyk synagogue, Warsaw's only remaining synagogue, dramatically altering the look of the historic neighborhood.

The skyscraper would include a new house of prayer, a kosher restaurant and vast commercial space, giving Warsaw's growing Jewish community a place to expand its activities and providing a source of profit for the future.

The project is another step in the revival of Jewish life in Poland, which was home to Europe's largest Jewish community until World War II.

Today, after being nearly wiped out in the Holocaust, the community is gaining both people and financial support. Some Poles are discovering they have Jewish roots and trying to reconnect to that culture, while a 1997 law that compensates the Jewish community for lost property has left it with new wealth to spend or invest.

However, the community still has not received approval from city officials for the building.

Community leader Piotr Kadlcik said he and other Jewish leaders are working to meet city requirements, and expressed hope that city approval would come soon. He also said the community is looking for investors to help fund the ambitious project.

Herbert Block, of the Joint Distribution Committee, a key Jewish organization that has worked in Poland since the fall of communism in 1989 to help rebuild Jewish life, said Jewish communities in Romania, Bulgaria and Slovakia successfully carried out similar projects.

"The principle of Jewish communities in central and eastern Europe becoming financially self-sufficient by developing their real estate is something that we endorse," said Block, the group's assistant executive vice president. He said he was not familiar with the Warsaw project.

The Nozyk synagogue, which opened in 1902 and now serves the city's Orthodox Jewish community, is the only prewar synagogue still standing.

It is located in what used to be the Warsaw Ghetto, where Nazi occupiers confined Jews before sending them to death camps, and was the site of a desperate uprising by Jewish resistance fighters in 1943. Most other buildings in the area were destroyed during the war.

In an interview with The Associated Press, Kadlcik described the new center as a matter of survival for Warsaw's Jewish community - now pressed into two cramped and dilapidated buildings.

"For the revival of Jewish life, this will be crucial for Warsaw," Kadlcik, president of the Union of Jewish Religious Communities in Poland, said Wednesday. "We don't have space for our activities now."

Architects have drawn up blueprints for a building shaped like a sail that would use solar and wind power to generate its own energy. The tower would be attached to the Nozyk synagogue.

Kadlcik said there are between 5,000 and 6,000 active members of the Jewish community in Poland, a country of 38 million, and that there are perhaps 30,000 more with some Jewish ancestry.