Veteran striker Romario scored the 1,000th goal of his career Sunday, converting a 48th-minute penalty in Vasco da Gama's 3-1 victory over Sport of Recife in the second round of the Brazilian national championship. 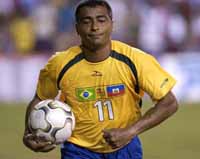 After the goal, the game was suspended - with Vasco leading 3-0 - as his mother, father wife, children and a horde of journalists rushed onto the field.

Romario then ran around the pitch, waving to the cheering crowd.

"I dedicate this goal to all the people who helped me and who were always by my side, like my parents, my children and all of you," a teary-eyed Romario said. "I want to thank God in heaven for all this."

"This is a historic moment for me and world soccer," Romario said. "I have been chasing this goal real hard and at times I thought I may never reach it. Without a doubt this was the most important moment in my career as a professional player."

At the end of the commemoration that lasted about 15 minutes, Romario returned to the field to finish the match.

Andre Dias accounted for Vasco's other two goals in the third and 37th minutes.

In Belo Horizonte, Corinthians overwhelmed Cruzeiro 3-0 with a goal by Everton Santos in the 10th minute and penalties by Marcelo Mattos in the 47th and 67th.

Nautico shocked defending champion Sao Paulo 1-0 in the northeastern city of Recife on a goal by Acosta in the 78th.

In the southern city of Porto Alegre, Carlos Eduardo scored in the 39th minute and Tuta in the 73rd to give Gremio a 2-0 victory over Fluminense 2-0 and its first win of the new season.

Many in soccer consider the achievement dubious, pointing to 71 goals Romario counts that were scored as a teenager and as an amateur, as well as others scored in training games and unofficial matches against small clubs.

In addition, his tally had to be revised several times because he initially counted goals scored in matches that never happened and in games that ended 0-0.

The mark is not recognized by FIFA, which says it only counts goals scored in official competitions.

According to FIFA, Romario still has quite a way to go before reaching 1,000 goals. Not counting the 71 before turning pro, Romario would have 929 career goals.

Others who by some accounts also have scored 1,000 are Brazilian Artur Friedenreich and Austria's Franz Binder.

Friedenreich, according to some historians, scored 1,329 from 1909-1935, principally with CA Paulistano of Sao Paulo. Binder supposedly has 1,005.

Romario stunned everyone by winning the 2005 scoring title in the Brazilian league at the age of 39.

Most of Romario's goals were scored for Vasco, where he began his career at 18 in 1985.

Romario says his most important goals came for Brazil against the Netherlands in the 1994 World Cup quarterfinals, and against Uruguay in South American World Cup qualifying a year earlier.