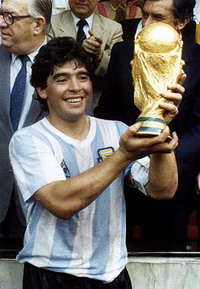 Maradona was noticeably thinner than before when he appeared on a popular Argentine television program that ended in the early hours of Tuesday. He was conditionally released Sunday after spending 16 days in several local clinics for treatment for what doctors said was excessive alcohol consumption that led to a form of hepatitis.

"I no longer drink alcohol and it's been two and a half years since I've done drugs," said Maradona, 46, who has battled obesity and cocaine addiction since his 1997 retirement and undergone eight serious hospitalizations in the decade since. "I just drink juices."

He said he planned to return to playing "showbol," seven-a-side, small-field exhibition soccer, although he did not say when.

"For my two daughters I'm going to continue to the end," he said. "I'm alive and I want to keep living."

Despite his problems, Maradona remains a beloved figure in Argentina. He captained the national team to victory in the 1986 World Cup and is considered among the all-time greats of soccer alongside Brazil's Pele.