Deco falls out for fortnight 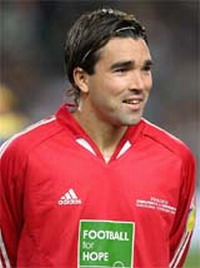 Deco falls out for fortnight

Deco, FC Barcelona midfielder, will not play for two weeks because of a sprained left ankle ligament.

Deco was injured in a tackle by teammate Ludovic Giuly during a training session on Thursday.

The Portugal international is expected to miss Barcelona's next two league games, against Real Sociedad and Real Betis. He will also be absent for next Thursday's second leg of the Copa del Rey semifinals against Getafe. Barcelona leads 5-2.

Barcelona, aiming for its third straight league title, leads with 62 points, one more than Sevilla with six rounds remaining.