Janez Brajkovic of Slovenia overcame a flat tire with the help of teammates and won the Tour de Georgia by 12 seconds over Christian Vande Velde. 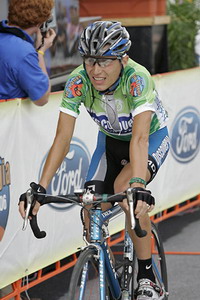 Brajkovic surged to the lead in the fourth stage of the weeklong event, a time trial up Lookout Mountain, and held on over the last three days.

"To win the race by myself would be impossible," said the 23-year-old Brajkovic, who rides for the Discovery Channel team once led by Lance Armstrong. "My team was just amazing. I have to say thank you to them for helping me."

Brajkovic's team came through when his rear tire went flat with just less than five laps to go on the 12-kilometer (7 1/2-mile) circuit course through the streets of downtown Atlanta.

Brian Vandborg quickly helped out the leader, stopping to switch tires so Brajkovic didn't lose much time. Then, the remaining Discovery Channel riders dropped to the back of the pack, picked up their teammate and made sure he didn't lose the 12-second lead he had coming into the finale.

Juan Jose Haedo of Argentina outsprinted American Fred Rodriguez to win the stage, nosing in front of a huge pack that included 64 other cyclists. Tucked safely among them was Brajkovic, who was credited with the same time as the winner (2 hours, 25 minutes, 30 seconds) and ensured that Vande Velde, who was in the same group, couldn't make up any time.

Brajkovic's overall time for the 658-mile race through Georgia and briefly into neighboring Tennessee was 25:26:33. Vande Velde of the United States was second, the only other cyclist within 3 minutes of the winner. Spain's David Gracia Canada held on for third in 25:29:37.