FC Barcelona forward Lionel Messi has drawn further comparisons with Diego Maradona by scoring a a near replica of one of the former Argentina captain's most famous goals. 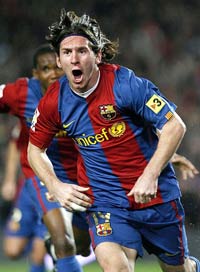 On Wednesday, Messi emulated Maradona's winner against England in the 1986 World Cup quarterfinals in scoring Barcelona's second goal in a 5-2 win over Getafe in the Copa del Rey semifinals.

Maradona's feat - four minutes after he had scored the notorious "Hand of God" goal - featured a long, dribbling run which left numerous England defenders and goalkeeper Peter Shilton in his wake.

Nearly 21 years later, the 19-year-old Messi dashed from his own half past four Getafe players before rounding goalkeeper Luis Garcia and scoring from a narrow angle in the 29th minute at Camp Nou.

Messi agreed his goal was "similar to Diego's" but added he could "never be compared" with the former Argentina star.

"I saw the space, I had a gap and I went forward," Messi told Barcelona's TV station. "I did well. I took the goalkeeper on and scored. My aim was the goal and to finish the move off. I saw that Samu (teammate Samuel Eto'o) was there, but there were two defenders heading back. I saw the gap and went for it."

Messi, who made his international debut for Argentina at 18 and appeared at last year's World Cup, added another first-leg goal in the 45th to boost Barcelona's hopes of winning Spain's knockout competition for the first time since 1998.

He is enjoying his best season since joining Barcelona as a junior. In March, he scored a hat trick in the 3-3 draw with Real Madrid.

Barcelona coach Frank Rijkaard, who gave Messi his league debut on Oct. 16, 2004 when the forward was 17, described Messi's goal as "a work of art."

"Messi is a great talent. He has scored a brilliant goal. It's true that it is very like Diego Armando Maradona's, but I think Messi accelerated even faster," Rijkaard said.

Messi's teammate, Portugal midfielder Deco, said it was "the greatest goal I have seen in my life."

However, Getafe coach Bernd Schuster blamed his team for not halting Messi as he began his run.

"We should have fouled him, he can't be allowed to reach the area like that," Schuster said.

Former Argentina international Jorge Valdano, who played with Maradona against England in 1986, highlighted differences in the two goals.

"Diego played with pauses and acceleration. Messi's was down to breakneck speed and acceleration," Valdano was quoted as saying by El Pais. "It's impossible not to compare Messi's goal with Maradona's, but the comparison doesn't turn Messi into Maradona."

Spanish newspapers on Thursday, however, said Messi was now the new Maradona.

Sports daily Marca referred to the Barcelona player as "Messidona," while national El Pais said Messi was "the modern version of Maradona."

"Messi's soccer takes up where Maradona's left off," the newspaper added.

Maradona, 46, is currently hospitalized with a bout of hepatitis blamed on alcohol abuse. It the eighth time he has been in hospital since he retired in 1997.