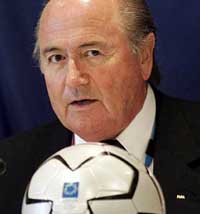 "If football is to grow here, it has to become a part of the social life of the people. We are here to guide you on how to go and where to go," Blatter said late Sunday in Calcutta, one of the few places in India where the game is popular.

Despite India's huge population it is currently ranked 165 in FIFA's world rankings, wedged between Andorra and Lesotho.

Spreading support for soccer would need to start at the school level, Blatter said, adding that FIFA had allocated US$400,000 (EURO295,000) for development projects.

Blatter said the aim of the "Win in India with India" campaign was not to replace cricket, which dominates India's sports culture, but to complement it.

"We have not come here to fight against an established sport in this country.

"I am here to speak on my game. It is football. Some call it soccer. We call it world sport," he said.