Evgeni Plushenko is coming back to rescue Russian figure skating. 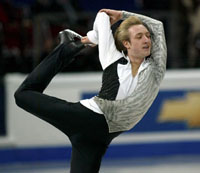 The 2006 Olympic gold medalist said Tuesday he will skate next season after sitting out since the Turin Games. He was disappointed by the showing of his nation in international events this year, including placings of 18th and 19th at last month's world championships. Russia has been a skating power since the 1960s and has dominated worlds and the Olympics since 1998.

"After seeing the results of Russian skaters in the world championships in Tokyo, I have decided to go back to competition," said Plushenko, who is in Richmond, Virginia, south of Washington, to begin the Champions on Ice tour. "I want to keep Russian figure skating at a competitive level. I want to bridge the gap so our young skaters have time to train and be competitive, which should be in a few years."

Plushenko also plans to compete at the Vancouver Olympics, something he mentioned he might try after winning at Turin last year.

"I feel strongly that I can be competitive and ready for the 2010 Olympics," Plushenko said. "I am doing triple axels in my show programs on the Russian tour and landing quads in my practice sessions."

The 24-year-old Plushenko said he would continue such difficult elements on the Champions on Ice tour before going into full training for the 2007-08 season. He expects to skate in Grand Prix competitions, as well as the European and world championships.

Plushenko owns three world titles (2001, '03 and '04) and a 2002 Olympic silver medal. His combination of jumping, spins and artistry made him a strong successor to Olympic champions Ilia Kulik and Alexei Yagudin. Plushenko had an intense rivalry with Yagudin in the late 1990s and earlier this decade.

He did not skate in the last three worlds, skipping 2005 because of injury and '06 because he was worn out from the Olympics.

Plushenko has battled knee injuries through the years, but the season off from competition has him feeling healthy.

While he skated in shows this season, Plushenko watched Russian skaters fail to medal at the worlds. The men, Andrei Lutai and Sergei Voronov, were 18th and 19th. The women, Elena Sokolova and Arina Martinova, were 13th and 16th.

Russia's pairs finished ninth and 11th, and the ice dancers were fifth and eighth.

It was Russia's worst showing at the worlds since 1960.

Plushenko is concerned Russia could lose at least one or even two of the maximum three Olympic spots if there isn't a quick turnaround.

So, at least in the men's event, he plans to do something about it.