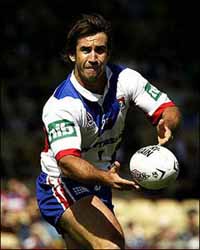 Johns, 32, reached his decision after undergoing CAT scans and discussing his future with spinal specialist Professor John Yeo. He aggravated a previous neck injury in a collision with teammates at training last Thursday.

"I think the time's right," Johns told a news conference at the headquarters of his Newcastle Knights club side.

"I'm still in shock. I was in shock when it happened, just totally numb," Johns said.

"It was really tough telling my family.

"I made an emotional call to my brother Matthew and it was even tougher talking to the players this afternoon."

Johns, described as the most gifted scrumhalf in rugby league history, led Newcastle to premiership victories in Australia's National Rugby League in 1997 and 2001, the highlights of a career which began in 1993.

He played 23 State of Origin games for New South Wales and 21 test matches for Australia, including the 1995 World Cup and the 2001 Kangaroo tour.

Johns ends his career with a record 2,176 points from 249 first grade games.

He first suffered a serious neck injury in 2003 when he was forced to miss the last five matches of the NRL season. His latest injury, a bulging disc in the neck, is understood to be a recurrence of that problem.

Johns said his family was relieved at his decision.

"They've sort of known that the neck's been sore for a couple of weeks," he said.

"I think they were relieved.

"I would have loved to have finished with a premiership but look, this could have happened when I was 19-year-old," he said.

"I've achieved so much in the game and I regard myself to be very lucky ... So it is a shock, but look, I'm not totally disappointed because I've had some great memories and, the main thing, I've had some great friendships which is the most treasured thing I've got out of the game.

"I've had a fairy tale career and I've feel lucky to have played the game."