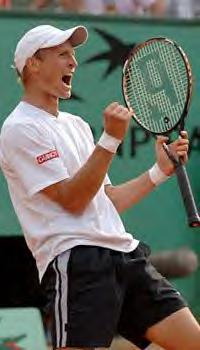 Mikhail Youzhny was to face Richard Gasquet in the second singles.

Davydenko dominated in the first set, but Mathieu soon dragged the Russian into long rallies and trapped him in the corners, leaving the court wide open.

"After 6-2 down in the first set, I tried to keep on going and play my game," Mathieu said. "I did my best and my victory gave confidence to my team."

"I tried to change tempo and play short in the fourth set but a couple of mistakes left me no chance," Davydenko said. "I found out that I'm absolutely unprepared for a clay season."

Russia is facing France in the Davis Cup quarterfinals for the third straight year. The Russians have not lost to France since 1983, and beat them in the 2002 final for their first Davis Cup title.