The cricket World Cup semifinals could be decided two weeks ahead of schedule and some fans are trying to sell tickets they no longer want. 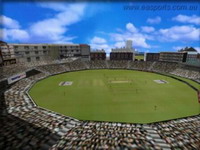 This isn't how the organizers of the first World Cup in the Caribbean saw it happening.

The early elimination of Pakistan and India provided the 16-team championship with upsets in the group stage, with Ireland and Bangladesh surprisingly advancing to the last eight.

But the round-robin Super 8s were expected to be a close-run competition to decide the final four teams. Instead, the semifinals should virtually be decided on Sunday - 13 games before the Super 8s finish.

Australia, New Zealand and Sri Lanka each have six points. South Africa has four, England and the West Indies two each and Bangladesh and Ireland have none.

After a two-day break, the tournament resumes on Saturday with South Africa expected to beat Bangladesh in Guyana. On Sunday, championship favorite Australia meets England in Antigua.

If the games go true to form, then the semifinal lineup will be taking shape and it will be a major surprise if it's not Australia, New Zealand, Sri Lanka and South Africa.

The championship then reverts to knockout format with the top team in the Super 8s facing the fourth place finisher and second meeting third.

Maybe then, the championship will liven up.

Apart from the close finishes in Sri Lanka's games against South Africa and England, the Super 8s have been a procession of lopsided victories. With host West Indies on a disastrous run of three heavy losses in a row, the local fans and even many of the visitors have lost interest and hundreds of tickets are going back on sale for virtually their original prices.

Australia's biggest problem could be that all its games so far have been easy.

Aiming to become the first nation to win the title three times in a row, Ricky Ponting's team outplayed South Africa - officially the No. 1 ranked international one-day team - by 83 runs in group action and then beat West Indies by 103 runs and Bangladesh by 10 wickets.

Maybe Ponting's team needs a genuine test. By the time it faces Sri Lanka and New Zealand in the last few games of the Super 8s, however, Australia's place in the last four will have been guaranteed.

It's up to England and the West Indies to try and catch the leading four. But both show no sign of doing it and Australia is likely to end England's hopes when they meet Sunday.

"It's a very important game for us," said Australia coach John Buchanan. "Coming out on top will enable us to knock another team out of the tournament."

Although England has beaten Australia in their last three competitive meetings - including the final of a one-day event in Australia - Michael Vaughan's team has no consistency.

It went close to a sensational victory over Sri Lanka on Wednesday when a late charge and an 87-run seventh wicket stand by Ravi Bopara and Paul Nixon meant England needed three runs off the last ball at Antigua. But Sri Lanka won by two runs to leave England on two points from three games.

After three heavy losses in a row to Australia, New Zealand and Sri Lanka, host West Indies needs to win its three remaining games against South Africa, Bangladesh and England to stand any chance of reaching the semifinal.

West Indies' fragile batting and sloppy fielding have been a big disappointment to local fans who were expecting its team to be among the leading contenders. Now its only realistic goal is trying to finish above England, Bangladesh and Ireland.