Romario gets another chance to score 1,000th goal at Maracana

Soccer officials changed the schedule of the Brazilian Cup on Monday so Romario could score his 1,000th career goal at Maracana stadium. 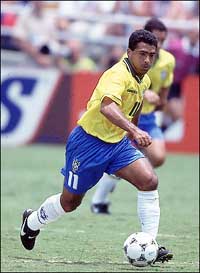 Romario gets another chance to score 1,000th goal at Maracana

Romario's Vasco was supposed to play its Wednesday's match against Gama at Sao Januario stadium in Rio de Janeiro, but the match was transferred to Maracana at the striker's request, Vasco spokesman Roberto Garofalo said.

The match between Fluminense and America, which originally was scheduled for the same time at Maracana, will begin a couple of hours earlier part of a doubleheader.

The Brazilian Soccer Confederation said it made the changes because of security reasons, saying Maracana is more capable than Sao Januario to host big crowds.

The matches are part of the second round of the Brazilian Cup. Vasco drew its first-leg match against Gama 2-2 in Brasilia two weeks ago, while Fluminense beat America 2-1 in Natal three weeks ago.

Romario, who has 999 goals according to his count, has said all along that he wants to reach the mark at Maracana, the same place where Pele scored his 1,000th in 1969.

Last week, Romario skipped one of Vasco's match because it would not be played at the stadium.

The striker had a chance to reach the milestone on Sunday against Botafogo, but was held scoreless in Vasco's 2-0 loss in the Rio de Janeiro state championship.

The 41-year-old Romario says he will be only the second player to achieve the 1,000-goal mark, along with Pele.

Many soccer experts and local media are skeptical about Romario's mark, however, because he counts 71 goals scored as a teenager and as an amateur, and numerous others were scored in scrimmages and unofficial matches against small clubs.

In addition, his list of goals had to be revised several times because he initially counted goals scored in matches that never happened and in games that ended 0-0.