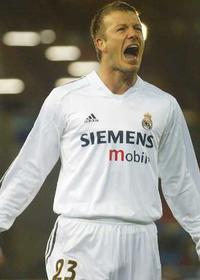 David Beckham may be on the way out of Real Madrid, according to comments made Wednesday by the club's sports director.

However, it wasn't clear whether Mijatovic meant the decision was final or whether contract talks were still alive.

Beckham's four-year contract expires at the end of this season. Mijatovic said Tuesday that the club wanted Beckham to decide by next week whether he will accept a two-year contract extension, reports AP.

Beckham has been stalling on the offer due to his lack of first-team opportunities under coach Fabio Capello this season. He has started only seven of 25 matches.