Real Madrid will reportedly soon announce the signing of Brazil left back Marcelo from Fluminense for Ђ6 million (US$7.7 million). 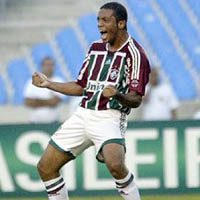 Marcelo, an 18-year-old whose style has been compared to Madrid's Roberto Carlos, held talks with the club's president, Ramon Calderon, in Madrid on Monday.

He would be free to play for the club once January's transfer window opens, although reports said the move might not happen until next season.

Marcelo whose full name is Marcelo Vieira da Silva Junior has been capped twice under Brazil coach Carlos Dunga. He scored on debut against Wales in September, but hasn't been included for Wednesday's friendly with Switzerland.

Marcelo would be Madrid's seventh Brazilian player. The others are Carlos, Ronaldo, Robinho, Emerson, Cicinho and Julio Baptista, who is on loan at Arsenal this season.

Sports papers have suggested the other newcomers will be River Plate striker Gonzalo Higuain and Boca Juniors midfielder Fernando Gago.

Madrid, which hasn't won a major trophy since 2003, is third in the Spanish league, two points behind leader and defending champion FC Barcelona.