Broncos advance to grand final with win over Bulldogs

Hooker Shaun Berrigan scored a pair of tries Friday as the Brisbane Broncos beat the Bulldogs 37-20 in a semifinal playoff match in Australia's National Rugby League. 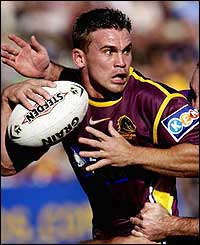 Broncos advance to grand final with win over Bulldogs

The win advanced the Broncos to the Oct. 1 grand final championship match against the winner of Saturday's other semifinal between Melbourne and St. George Illawarra.

The Bulldogs led 20-6 at halftime but were held scoreless in the second half by a strong Brisbane defense. Broncos captain Darren Lockyer had a try, one conversion and a field goal.

It was the third-biggest comeback in league playoff history. Only Newcastle, which overcome an 18-point deficit against Parramatta in 1997, and the Bulldogs, who trailed the Parramatta Eels by 16 points the following year, have registered bigger come-from-behind victories, reports AP.

"At half time we were down and out and Wayne just told us to get out there, it was do or die," Berrigan said. "I tell you what, the boys just played enormous."