Peter Brock, one of Australia's most successful and well-known auto racers, died Friday in a rallying accident. 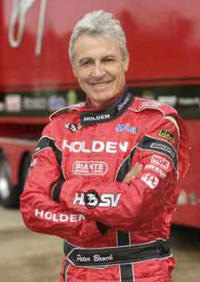 The Confederation of Australian Motor Sport (CAMS) said Brock, 61, died when his car crashed during the Targa West rally in Western Australia state. His co-driver was taken to hospital in a stable condition.

"On behalf of the motor sport community, CAMS offers its sincere sympathy to Peter's family and many friends," the statement said.

Witnesses told local media that Brock's car hit a tree near the small town of Gidgegannup, about 40 kilometers (25 miles) north of Perth.

Brock dominated Australian auto racing for three decades before retiring from the touring car circuit in 1997. He made a couple of brief comebacks and at one stage owned a racing team, the AP reports.

He won Australia's premiere touring car event, now known as the Bathurst 1000, a record nine times, and held more pole positions and won more races than any other driver since the inception of the Australian Touring Car Championship in 1960.

National radio and television interrupted normal programming to report the death of Brock, who many people called "Peter Perfect" for his success on the track, as a road safety campaigner and for his humble, nice-guy image.

It was the second death this week of an iconic Australian, coming four days after Steve Irwin, globally famous as television's "Crocodile Hunter," was killed by the barb of a stingray while scuba diving on the Great Barrier Reef.

"It's been a pretty sad week for Australia ... and Brocky will be very sadly missed," Prime Minister John Howard said.

Howard described Brock as an "absolute legend in Australia" and said the death was a "terrible loss for motor racing and sport."

In a radio interview broadcast earlier Friday, Brock had said he was still trying to master the rally car, which had a vastly different set up to a touring car.

"I've really got to get to grips with this car and by Sunday I think I might," Brock said during the interview.

Australian auto racing chief Colin Osborne said Brock was an ambassador for road safety and was a great example to other drivers and the community.

"Peter certainly set a real example - he wasn't a person who was in any way cavalier," CAMS president Osborne told reporters in Adelaide, South Australia state. "Peter was an iconic figure not just in motor sport. There are a lot of people in Australia, whether they were involved in motor sport or not, who feel as though they had a real connection with Peter Brock."

John Coates, president of Australia's Olympic committee, said he was shocked and saddened to hear of Brock's death.

Brock worked as an athlete liaison officer for the Australian team at the Sydney 2000 Olympics and at Athens in 2004, where he was a mentor for young competitors and gave support and motivation to the team.

"Peter pitched in and helped out wherever he could and was extremely popular with the athletes," Coates said. "He joined in all the Village activities and was very much a team man."

Coates said his best non-racing memory of Brock was watching him sing with Australian swimming coach Laurie Lawrence and Australian folk singer John Williamson at a team barbecue at the Athletes' Village in Sydney.

Brock is survived by his ex-wife, Bev, and three children. The couple split last year after 28 years of marriage.

Bev Brock said she had had a premonition about her former husband's death.

"He went out enjoying himself, one presumes, but I have to say I had a premonition about this and it's been a difficult week," she told Network Ten television.