Portugal, playing with 10 men, gets a draw in first game

Finland held Portugal to a 1-1 draw in Group A of qualifying for the 2008 European Championship on Wednesday. 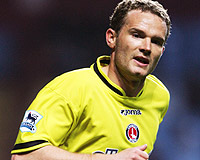 Portugal, playing with 10 men, gets a draw in first game

Jonatan Johansson opened the scoring in the 23rd minute after Jari Litmanen and Joonas Kolkka combined to cross the ball for the Finland striker to tap in from close range.

But Nuno Gomes equalized in the 42nd when Deco received the ball from 19-year-old rookie Dani and played him through to beat goalkeeper Jussi Jaaskelainen with a low shot.

Portugal's Ricardo Costa was sent 10 minutes into the second half for a second bookable offense.

It was Portugal's first qualifier, while Finland had won 3-1 at Poland on Saturday.

"I am satisfied with a point, quite happy regarding the conditions at the moment," Portugal coach Luiz Felipe Scolari said. "It was important not to lose. Finland was well organized and had dangerous set pieces."

Finland forward Jari Litmanen said there was disappointment, not taking advantage of the man advantage

"In a certain way this was a disappointment because we had the chace to take three points when we had a man advantage," he said. "But four points from two tough games is a good haul. Often we have had zero points at this stage of qualifying."

Midfielders Petit and Deco were best for Portugal, but Cristiano Ronaldo was well contained by Finland's defense.

Litmanen's set pieces were always dangerous, while Jaaskelainen made a few good saves before the interval for Finland.