The football team of the Czech Republic will be without Milan Baros for its first two 2008 European Championship qualifiers the Aston Villa striker was left out of its squad on Thursday. 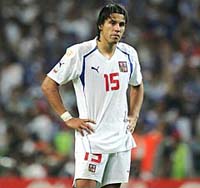 Baros will sit out next month's two games because of a foot injury he worsened Wednesday while training with his English club, although Chelsea goalkeeper Petr Cech and Arsenal's Tomas Rosicky were both fit enough for selection.

"We know that Rosicky does not play now, but we have guarantees that in 10 days he should be fit," coach Karel Bruckner said.

Rosicky hasn't played since his move to Arsenal because of a minor muscle injury.

"The same goes for Cech, whose recovery continues very quickly," Bruckner said, referring to the player's shoulder surgery after the World Cup, the AP said.

The Czech Republic are without Juventus midfielder Pavel Nedved, who this month announced his retirement from international soccer.

The Czechs host Wales on Sept. 2 in Teplice and play Slovakia in Bratislava on Sept. 6. Ireland, Cyprus and San Marino are the other teams in the qualifying group.