SkyNews sports correspondent Paul Kelso tweeted a photo against the background of a van of Russian soccer fans from St. Petersburg. The photo has attracted a lot of attention and generated discussions on the Internet because of the image depicted on the van. 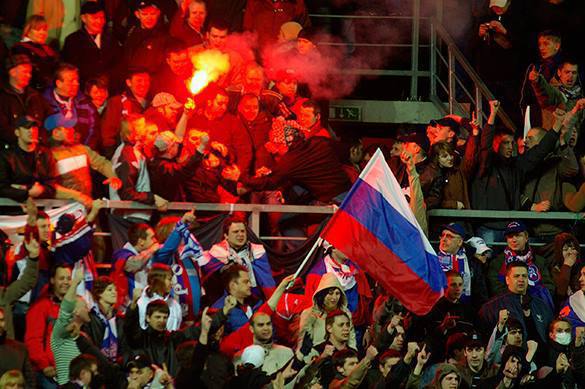 The rear side of the van is seen decorated with an image of a winged heart-shaped football. One of the wings is painted in the colors of the Russian flag, and the other one - in the colors of the French flag. The slogan to the image says: "To France with love. Russian heterosexuals."

The phrase written on the van raised inexhaustible interest in the van of the Russian fans. The photo has already appeared on the US edition of Mashable and generated discussions in European media outlets. The phrase appears to be not only a joke, but also a reminder of the state of affairs with gay rights in Russia.

Noteworthy, Russian Minister for Sports Vitaly Mutko said at a meeting in April of this year that Russia would not allow any infringement of the rights and freedoms of people representing sexual minorities during the World Cup in 2018.

The problem of Russian gays and their rights was discussed extensively during the Olympic Games in Sochi in 2014. However, all the gossip was just a waste of breath. The State Duma had decided that the law banning gay propaganda in Russia wold not affect the participants and guests of the Sochi Olympics.