From Russia, with gay love

"We see ourselves as a traditional nation, In Russia, women live with men, and men - with women, it comes from the history of our country." 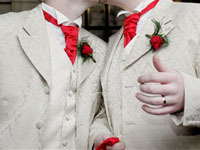 "We respect all opinions, and we respect everyone, but, in turn, they should respect our laws."

"We, the Russians, may differ from the Europeans."

There is nothing special about these phrases. From the times of Adam and Eve, men and women live together, and guests respect those who welcome them. When it comes to one particular country, its laws should be respected, whether it goes about France, America, Saudi Arabia, Russia or Gabon.

The author of those phrases is an athlete, a woman, who is not just beautiful and talented (two-time Olympic champion and three-time world champion, European champion and holder of the world record in open air pole vault). She is a patriot, who is not shy to show it. During the most recent Russian elections in 2012, she was one of the trustees of Vladimir Putin during his presidential campaign.

For her support of the Russian government and the law prohibiting the propaganda of non-traditional sexual relations with minors, Russian champion of Dagestani origin Yelena Isinbayeva has become a target of moral violence. Western publications called her a homophobe and called to strip her of the title of the ambassador of the International Olympic Committee. Next year, Isinbayeva is to become an honorary mayor of the Olympic Village during the upcoming Olympic Games in Sochi.

This offensive against Yelena Isinbayeva's dissent (in this case, for her appeal to respect the laws of a sovereign state) fits into the context of the media hype surrounding preparations to the Sochi Olympics in Russia, which will certainly lead to a powerful offensive against the Kremlin.

In England, for example, there are calls to boycott the Olympic Winter Games in Sochi in 2014 because of the persecution of the LGBT community in Russia. In France, some say that France should not send a delegation to Sochi, while German Justice Minister Sabine Leutheusser-Schnarrenberger believes that her country could boycott the Sochi Olympics as well.

In turn, the general director of the organizing committee of the 2018 World Cup, Alexey Sorokin, (just like Yelena Isinbayeva) has defended the law banning the promotion of non-traditional sexual relations among minors. According to him, "neither the Olympics nor the World Cup should be used as a tribune for expressing various views, either for Nazis, or for supporters of other ideas."

Finally, the International Olympic Committee confirmed that it would not recognize any efforts taken by athletes in favor of gay rights during the Games in Sochi.

It is worthy of note that homosexual relations between men are not considered a criminal action in Russia - the adequate law was passed in 1993. Homosexuality among women has never been forbidden in the country. For comparison, the decriminalization of homosexuality in France dates back to 1982, in Germany to 1994, the United States - to 2003.

One may only wonder what will happen in 2022, during the World Cup in Qatar, where any homosexual relations are punishable by imprisonment for five years and whipping.

It would be very interesting to see whether the supporters of boycott will be swift and arrogant enough to threaten the Wahhabi monarchy. They seem to be determined to behave so towards Russia, whose patience, in the long run, deserves an appraisal.