Police questioned Manchester United defender Jonny Evans in connection with an alleged rape of a woman at the club's Christmas party. 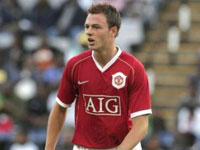 The 19-year-old defender turned himself into police Tuesday evening and was arrested.

United players booked the Great John Street Hotel in downtown Manchester for a party on Monday night. A 26-year-old woman was allegedly assaulted early Tuesday at the hotel.

"Police are currently investigating a report of rape at a hotel in Manchester city center," Greater Manchester police said. "At about 4:15 am on Tuesday, police were called to the hotel on Great John Street to a report that a 26-year-old woman had been raped. Inquiries are continuing."

A police force member on condition of anonymity reported that Evans was the 19-year-old man in custody.

The Sun newspaper and Britain's Press Association also identified Evans as the man under arrest.

Manchester United spokesman has declined to comment, but police will update the media on the investigation later Wednesday.

Evans was among the United players photographed leaving the club's Christmas lunch Monday.

Evans, Northern Ireland internationa,l is not a regular in Alex Ferguson's first team, but was handed a Champions League start last week at AS Roma with progression to the next round already secured.

Evans returned to the Premier League champions in the summer after loan spells at Sunderland and Antwerp in Belgium. He played 18 league games for Sunderland last season.

Evans made his first-team debut for United in a League Cup loss to Coventry in September. He played in the 4-0 Champions League win over Dyanmo Kiev last month and the 1-1 draw at Roma.

Evans played for Northern Ireland in the 1-0 loss at Latvia in August in a European Championship qualifier.