Sebastien Loeb may get a fourth consecutive world championship title in Rally of Wales. 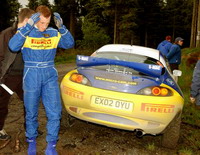 After six of 17 stages, Loeb was in third place overall on Friday, 57.9 seconds behind leader Mikko Hirvonen.

Title rival Marcus Gronholm was second, 39.6 seconds behind Hirvonen, who won five of the day's six stages. Loeb won the other.

Loeb needs to finish in fifth place or better in the final rally of the year to equal Tommi Makinen's record of four consecutive world titles, set from 1996-99.

During the first stage, Simon Harraway's Subaru went off the forest track and two spectators were taken to a local hospital with minor injuries.

Harraway and his navigator were unhurt.

The crash didn't affect the leading drivers, as Hirvonen won the stage in 9 minutes, 15.2 seconds and also captured the next three. Loeb won the fifth before Hirvonen won the day's final stage.

Drivers had to contend with heavy rain, fog, mud and rutted gravel roads and finished the day's racing in darkness.

Loeb leads the standings with 110 points, followed by Marcus Gronholm on 104 and Hirvonen with 89. Loeb moved into the overall lead by winning the Rally Ireland on Nov. 18 after Gronholm crashed out.