Ronaldo said that his AC Milan teammate Kaka "deserves all the world prizes" and will win the 2007 Golden Ball award. 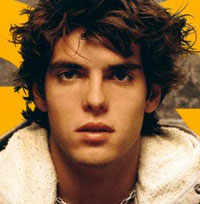 "Kaka is an extraordinary guy," Ronaldo was quoted as saying in Friday's edition of Gazzetta dello Sport. "He has made too much of a difference this year to be called into question."

The Golden Ball award, or Ballon D'Or, is awarded by France Football magazine, which this year extended its poll of journalists to consider the best player in the world and not just in Europe, as had traditionally been the case.

The magazine has remained tightlipped about the result which will be announced in Paris on Sunday, but the Italian press is convinced the 25-year-old Kaka has beaten other title contenders Lionel Messi, Didier Drogba, and Cristiano Ronaldo.

With 10 goals, Kaka was the top scorer when Milan won the Champions League for the seventh time in May. He was also instrumental in the club's fifth European Super Cup triumph in August.

Kaka is also a finalist for the FIFA World Player of the Year award on Dec. 17, along with FC Barcelona's Messi and Manchester United's Ronaldo.

"(Kaka) deserves all the world prizes," said teammate Ronaldo, who won both the Golden Ball and FIFA awards in 1997 and 2002.