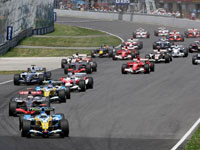 FIA summoned Renault officials to a hearing of the World Motor Sport Council in Monte Carlo, Monaco, on Dec. 6 to answer a charge of having "unauthorized possession of documents and confidential information" of McLaren cars between September 2006 and October 2007.

Renault finished third in the manufacturers' championship with 51 points, 153 behind winner Ferrari.

Heikki Kovalainen finished seventh in the drivers' standings with 30 points, followed by teammate Giancarlo Fisichella with 21.

The move follows McLaren's involvement in a spy scandal that overshadowed much of the season.

McLaren was fined a record US$100 million (€72 million) by the World Motor Sport Council on Sept. 13 after FIA found the team guilty of using leaked secret data from Ferrari.

McLaren was also kicked out of the manufacturers' championship by FIA, but Alonso and teammate Lewis Hamilton were not docked points. Hamilton finished second and Alonso third in the drivers' championship.

The McLaren team declined to comment on FIA's allegations against Renault.

The new accusations came amid reports that FIA sent legal and technical experts to seize documents from McLaren's headquarters in Woking, England, as part of its continuing investigation into the Ferrari leaks.

McLaren said the team was co-operating fully with the FIA in the Ferrari case.