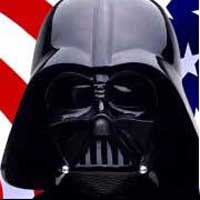 The joke is on Vice President Dick Cheney. But is you’re not from the White House you may have problems with it.

As he launched into a health-care speech Wednesday, President George W. Bush warmed up his audience with a nod to Halloween costumes, at Cheney's expense.

Oct. 31 is Halloween in the United States, a time when children and some adults dress in costumes, sometimes scary ones.

"This morning I was with the vice president," Bush told a gathering of grocery manufacturers. "I was asking him what costume he was planning. He said, 'Well, I'm already wearing it.' Then he mumbled something about the dark side of the force."

Ah yes, that old Darth Vader line. Used to be that only Cheney's critics called him that, not his boss. Or his wife. Or Cheney himself.

"Most of you knew me long before anyone called me Darth Vader," Cheney said in a speech at The Washington Institute last week. "I've been asked if that nickname bothers me, and the answer is, no. After all, Darth Vader is one of the nicer things I've been called recently."

Darth Vader is the heavy-breathing villain of the Star Wars movies - a reference to Cheney's terse manner and sometimes gloomy view of world affairs.

Cheney's wife, Lynne, went even further in her appearance on "The Daily Show" earlier in October. She showed up with a Darth Vader doll.

"It's a special present for you," she told the show's host, Jon Stewart, who has been known to skewer the vice president. "It's an old family heirloom."

That is three times this month that the White House has embraced the label.

So what is this? Some mind trick?

Cheney's spokeswoman, Lea Anne McBride, said the vice president has always had a good sense of humor. He has made his share of self-deprecating references to his Darth Vader reputation over the years. It just so happens that they seem to be piling up during this season of ghoulish costumes.

It is also hunting season, another time when Cheney takes a ribbing. He made headlines this week just for going hunting at a secluded Hudson Valley gun club in New York. The outing inevitably evoked memories of 2006, when Cheney accidentally shot his friend while quail hunting.

Asked why Cheney seems fine with the Darth Vader tag, McBride said: "If it brings some levity to politics, he's fine being the target."

At the vice president's home at the Naval Observatory, his staff put both of the Cheneys' dogs in Halloween costumes on Wednesday, just for fun and family photos. The yellow lab got to be Superman. The black lab? Darth Vader.