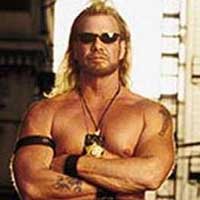 Duane ‘Dog’ Chapman, a TV bounty hunter, said he was sorry for repeatedly using a racial slur in a conversation with his son that was recorded and posted online.

Chapman, star of the hit reality series "Dog the Bounty Hunter," responded after The National Enquirer posted a clip of the conversation in which Chapman uses the N-word in reference to his son's girlfriend.

A&E officials did not immediately return phone messages seeking comment from The Associated Press. Chapman issued a statement Wednesday apologizing for the comments.

The recording was first posted online by the Enquirer. It was unclear who recorded the conversation or how the tabloid obtained the 1Ѕ-minute clip in which Chapman uses the N-word six times. A woman at the Enquirer said no one would be available to comment after hours.

In the conversation, Chapman urges his son to break up with his girlfriend. He also expresses concern about the girlfriend going public about the TV star's use of the N-word.

In the clip, Chapman also stated he does not care that his son's girlfriend is black.

In a statement, the 54-year-old Chapman said he has "utmost respect and aloha for black people who have suffered so much due to racial discrimination and acts of hatred.

"I did not mean to add yet another slap in the face to an entire race of people who have brought so many gifts to this world," he said. "I am ashamed of myself and I pledge to do whatever I can to repair this damage I have caused."

Chapman said, "My sincerest, heartfelt apologies go out to every person I have offended for my regrettable use of very inappropriate language. I am deeply disappointed in myself for speaking out of anger to my son and using such a hateful term in a private phone conversation."

Chapman said the clip was completely taken out of context.

"I was disappointed in his choice of a friend, not due to her race, but her character," he said. "However, I should have never used that term."

Chapman said he is meeting with his spiritual adviser, Rev. Tim Storey, who is black, and hopes to meet with other black leaders, "so they can see who I really am and teach me the right thing to do to make things right, again."

"I know that all of my fans are deeply disappointed in me, as well, as I have tried to be a model for doing the right thing," he said. "I did not do the right thing this time, and hope you will forgive me."