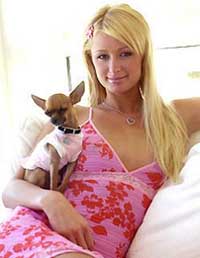 "This is a very special celebrity owned home," according to a description on MLS, the multiple listing service that brokers and customers rely on for a first look at available properties.

The house boasts 4 bedrooms and 3 1/2 bathrooms and includes a separate guest quarter and office. One bedroom was converted into the "ultimate closet."

Hilton's publicist, Elliot Mintz, confirmed the house was put up for sale but declined further comment.

The move comes a month after the 26-year-old Hilton walked out of jail after a bizarre, three-week stay in which she was briefly released to home confinement and then sent back screaming to a lockup. Hilton had been sentenced to a 45-day jail sentence for a probation violation.

A throng of reporters and paparazzi staked out the residence above Sunset Boulevard last month, capturing the celebutante's move from jail to home and back. The onslaught caused some residents to circulate a letter advising neighbors to call police about the noise and traffic.

A call to the listing agent, Mauricio Umansky, was not immediately returned.