An endangered rabbit named after Playboy magazine founder Hugh Hefner is getting some help from Florida wildlife officials, who next week will try to block predators from the rabbit's home. 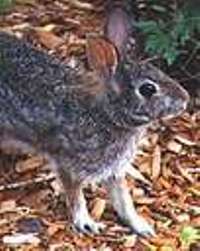 The population of Sylvilagus palustris hefneri a reference to Hefner, who financed research that identified the species in 1980 has dwindled by about 50 percent in the past two years and is in danger of being wiped out, scientists say.

Wildlife officials will begin to trap feral and stray cats in an area of the Florida Keys where the Lower Keys marsh rabbits make their home.

The dark brown cottontail with a grayish-white belly was put on the U.S. endangered species list in 1990 when the population in the Florida Keys was estimated at 200.

Not everyone is happy about the trapping program. Some activists dressed up in cat suits and waved signs in protest when the program was announced a month ago.

Wildlife officials said all cats will be "humanely trapped alive" and then transported to animal shelters.