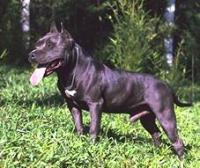 After a dog seriously injured a 5-year-old boy the mayor of southern Belgian town decided to ban dangerous dogs, his office said Tuesday.

Thomas Wieme was attacked by an American Staffordshire Terrier Friday in Chapelle-Lez-Herlaimont and bitten a half dozen times in the throat. He is being kept in an artificial coma to improve his chances of recovery.

Mayor Patrick Moriau will put a proposal to the municipal council late Tuesday and expects it will be adopted, his office said. The office would not provide further details and the mayor could not be reached by telephone.

Details of the measures were still unclear, but local media said he would seek to ban American pit bulls and American Staffordshire Terriers, and impose restrictive measures on other breeds deemed dangerous by the town council.

Restrictions would include requiring owners to muzzle dangerous dogs in public and keep them locked up when at home. Owners would also have to take special courses on handling such dogs, reports said.

The Belgian parliament is also considering similar restrictive measures, with a bill still awaiting approval by the legislature.

There have been at least 16 serious incidents so far this year across the country involving dogs maiming children.