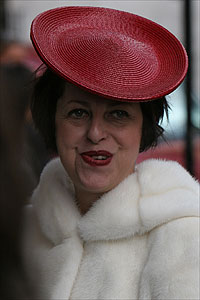 Isabella Guru, stylist and fashion guru, who was famous for her vibrant and often outrageous presence on the British fashion scene, has died at the age of 48, her husband said.

Detmar Blow said she died in the Gloucestershire Royal Hospital in western England. News reports said she had recently been diagnosed with ovarian cancer.

Renowned for her larger-than-life hats and blood-red lipstick, Blow was credited with discovering designer Alexander McQueen and milliner Philip Treacey. She helped launch the careers of models including Stella Tennant and Sophie Dahl.

Most recently, Blow was an editor-at-large for Tatler magazine.

"She was in the office just last week, bursting with ideas. They sounded impossible, but you always knew with Isabella it would work and be marvelous," Tatler editor Geordie Greig told The Daily Telegraph. "She was bored by cliches. She didn't do ordinary or dull."

Born Isabella Delves Broughton in London in 1958, Blow moved to New York in 1979 to study ancient Chinese art at Columbia University. She soon dropped out and moved to west Texas to work for Guy Laroche.

In 1981, she met Anna Wintour, then fashion director of U.S. Vogue, and was hired as her assistant.

"I don't think she ever did my expenses, but she made life much more interesting," Wintour told The Times newspaper on Monday.

Blow later returned to London, where she worked for Tatler, the Sunday Times and British Vogue.

She met Detmar, an art dealer, at a wedding in 1987. They became engaged just 16 days later and married the following year.

Blow asked Treacey to design her bridal headdress, and a fashion collaboration was born.

She would serve as muse for a host of Treacey headgear, including "The Ship" - a replica 18th century clipper in full rigging. Another creation, the "Gilbert & George" - a mass of pink and green lacquered ostrich feathers stuck into a mortar board - was so wide that Blow was unable to navigate the door of the charity event for which she had ordered it.

A 2002 exhibition and accompanying book, "When Philip Met Isabella," featured Blow in some of Treacey's most memorable creations.

"I don't use a hat as a prop. I use it as a part of me," she told The Guardian newspaper before the exhibition's launch. "If I am feeling really low, I go and see Philip, cover my face and feel fantastic."