Paris Hilton is so pampered she doesn't read her mail. 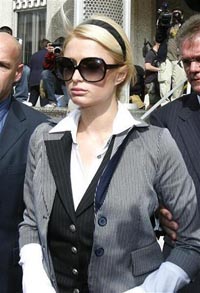 "I have people who do that for me," she told a judge.

And based on statements from Hilton and publicist Elliot Mintz - who announced Sunday that he will no longer be working for her - she apparently took legal advice from Mintz but not her lawyers.

Facing a 45-day jail sentence - and perhaps her first brush with accountability - could be a reality check for Hilton. But regardless of how she handles it, it may make her more popular than ever.

"It will actually increase her star appeal in a very sick and demented way," said longtime publicist Michael Levine. "There's a segment of our society that's somehow engaged in the soap opera that is Paris Hilton, and this a very compelling plot line in the soap opera."

A judge ordered the socialite to report to a county jail in suburban L.A. by June 5 to serve 45 days for violating the terms of her probation in an alcohol-related reckless driving case. Her attorney has said he will appeal.

Mintz said in a statement Sunday that he and Hilton had parted ways over an apparent "misunderstanding she received from me regarding the terms of her probation."

He said Hilton was being truthful when she told a judge she believed - incorrectly, it turned out - that "it was O.K. for her to drive under certain circumstances" under the terms.

The 26-year-old hotel heiress, who parlayed her party lifestyle into worldwide fame, told the judge Friday that she didn't have time to talk with her attorneys about her probation. That dismissive attitude is part of her appeal, said veteran publicist David Brokaw.

"The premise of her fame is being naughty," he said. "This is a career move for her. It simply fuels the fascination. She can only win with this."

Hilton made her first public comments on the sentence to photographers assembled outside her home on Saturday night.

"I feel that I was treated unfairly and that the sentence is both cruel and unwarranted and I don't deserve this," she said as she left for a shopping trip with her mother.

Some celebrities have fared well after a stay in the graybar hotel. Martha Stewart started a TV show after her stint behind bars. Robert Downey Jr. rebounded with a recurring TV role that led back to the big screen. Others, including Bobby Brown, Heidi Fleiss and Fatty Arbuckle, weren't as fortunate.

Bad behavior means big publicity for Hilton, Levine said, noting that she wasn't maligned when her homemade sex tape surfaced on the Internet. Instead she became more famous than before.

"This is a girl who has total disregard for the rules of our society," Levine said. "And she's been rewarded for it."

"It's going to make her very unhappy because she's not used to this. She couldn't buy her way out of it," he said. "But one 45-day trip to jail is not going to change her behavior."

Hilton's plethora of professional pursuits - which include a namesake perfume and handbag line, a fledgling music career and a starring role in the reality show "The Simple Life" - can probably survive 45 days without her.

"Production for `The Simple Life Goes to Camp' wrapped in early April and will premiere Memorial Day," as planned, the E! network said in a statement. "We wish Paris all the best as she deals with this difficult time."

Hilton's fans filled her MySpace page with words of support over the weekend.