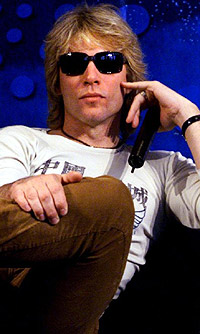 New Jersey rockers Bon Jovi will be the first act at "The Rock," the state's newest arena, officials announced.

The band will play several shows at the 19,500-seat Prudential Center starting Oct. 26, said Pat Smith, a spokesman for AEG New York/New Jersey, part of Anschutz Entertainment Group, which is booking concerts and special events for the arena. The number of shows has not been determined, he said.

Bon Jovi's hits include "You Give Love a Bad Name."

Newark Mayor Cory Booker added, "The oldest and greatest city in New Jersey will open the newest and greatest arena in the nation, energized by the talent of Bon Jovi, the vision of our partners in this project, and the power of Newark's residents."