A judge who issued an arrest warrant against Richard Gere for publicly kissing a Bollywood actress has been transferred from his job, a media report said Thursday. 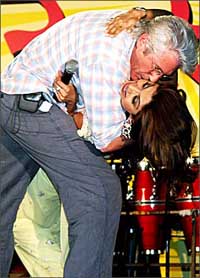 Judge Dinesh Gupta, a magistrate in the northwestern city of Jaipur, had issued arrest orders last week for both Gere and actress Shilpa Shetty after the kissing incident at a public AIDS awareness event in New Delhi earlier in March.

The public display of affection drew an outcry among Hindu hardliners, with rallies against the actors held in several cities. But the judge's arrest order also drew harsh criticism in India, with senior lawyers saying it had no legal merit and made the country look ridiculous.

The paper quoted High Court Commissioner C.P. Singh as saying the transfer was "routine," but he noted that the order came from a state chief justice. Officials could not immediately be reached for comment.

It was not immediately clear what effect the transfer would have on the arrest warrant. Gupta refused to comment on the transfer, the paper reported.

Gere apologized for any offense he may have caused in India, where public displays of affection are largely taboo. But he also said the whole controversy was manufactured by a small hardline political party.

Small groups of radical Hindus staged noisy protests after the incident and burnt effigies of Gere and Shetty.

Gere, who left shortly after the kissing incident, is a frequent visitor to India, promoting health issues and the cause of Tibetan exiles. The Tibetan spiritual leader, the Dalai Lama, has his headquarters in the northern Indian town of Dharmsala.

A fellow contestant, Jade Goody, sparked international headlines by allegedly making racist comments to Shetty. The comments sparked public outrage in Britain and India and Shetty went on to win the competition.