Doctors removed a 2-pound (900-gram) tumor from the back of a newborn's neck and the baby girl appeared to be doing fine a day after she was born, her parents said. 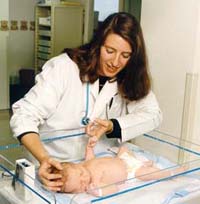 An ultrasound detected the fast-growing, grapefruit-sized tumor on Monday during mother Kari Whittington's visit to her doctor's office. No abnormalities were detected in the previous ultrasound a month earlier.

Her daughter, Addison, was delivered by Caesarean section Thursday, five weeks premature, and stabilized before a nine-person surgical team started working on her.

"The mass itself started to spontaneously bleed ..." pediatric surgeon Steven Rothenberg said Friday. "If we'd been short one pair of hands, she wouldn't have made it."

Rothenberg said the growth, called a cervical teratoma, is rare and occurs in about 1 in 50,000 births. The blood-swollen tissue and veins made up 40 percent of Addison's weight.

"It was definitely overwhelming," Whittington, 28, told the Rocky Mountain News. "Everything happened so quickly."

Addison could be hospitalized for up to two weeks. The scar on her neck and along her jaw line should disappear over time, Rothenberg said.