Diego Maradona was in stable condition Wednesday as he continued treatment at a psychiatric clinic for alcoholism, the hospital said. 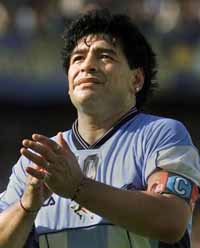 Maradona, after spending most of the past month in two hospitals for treatment of a hepatitis condition blamed on alcohol abuse, was taken to the Avril clinic in the Argentine capital on Saturday for the follow-up treatment.

Wednesday's statement was the first by the clinic, which said it issued the report because of what it described as unconfirmed speculation in local press reports about the health of the Argentine soccer hero.

"We wish to inform that the health of Diego Armando Maradona is stable and without any complication," the clinic said. "He is continuing the treatment plan set out for him."

Maradona, 46, led Argentina to the 1986 World Cup. He is considered among the all-time greats of the sport alongside Brazil's Pele.

Maradona has battled obesity and cocaine addiction since his 1997 retirement and undergone eight serious hospitalizations in the decade since.

He was reported near death during hospitalizations in 2000 and 2004 for health complications blamed on his cocaine addiction, which his doctors said he later surmounted.

Doctors said drugs were not the cause of his latest health problems but blamed excessive drinking and eating for his latest woes.