Miss America can add crime fighter to her resume. 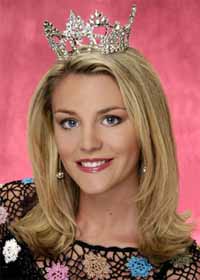 Officers with Suffolk County's computer crimes unit created an online profile of a 14-year-old girl that included photographs of Nelson as a teenager.

"I got to chat online with the predators and made phone calls, too," Nelson said by phone from Atlantic City, New Jersey "The Suffolk County Police Department was there the whole time."

The operation was filmed for a segment of "America's Most Wanted" that will air Saturday on Fox. Police spokesman Tim Motz said the operation was ongoing and declined to comment Tuesday evening.

At least four men were arrested and face charges, said Avery Mann, a spokesman for the show. Another six men agreed to meet Nelson, of Lawton, Oklahoma, he said.

Nelson, 20, posed as a young teen online and went into chat rooms, where she said men would begin sending her instant messages asking her how old she was and where she lived.

"I would say I'm a 14-year-old female from Long Island. Sometimes they would say, 'You're too young, sorry,' which is exactly what needs to happen, but some would continue chatting.

"It would only take a matter of time before it got pretty explicit."

Nelson then arranged to meet the men at a home in Long Island, where police and camera crews were waiting.

"The story was that they knew I was 14, and I told them I was cutting school to meet with them," Nelson said. "I stood outside on the porch, and I would say, 'Hi' to them and wave them inside."

Once she entered the home with the suspect, Nelson said, she left the room, and police and "America's Most Wanted" host John Walsh confronted the suspect.

"That part was very scary, but the police were all over the place," Nelson said. "I was nervous, of course, but it was a very controlled environment, very safe."

Art McMaster, president and CEO of the Miss America Organization, said he initially was hesitant about Nelson participating in the sting, but agreed after speaking with Nelson's father and the producers of "America's Most Wanted."

"We came to the agreement that as long as she was safe and wanted to do this, we'd be behind her," McMaster said.

Nelson, whose platform issue is Internet safety for children, said she was eager to participate.

"As many as we caught on that day, there are a lot more out there," she said. "It's nice to know that they were chatting with police officers and me rather than a 14- or 15-year-old girl."