Heather Mills booted from 'Dancing With the Stars'

With a farewell speech tucked into the top of her sparkly costume, Heather Mills came prepared to be eliminated from "Dancing With the Stars" Tuesday. 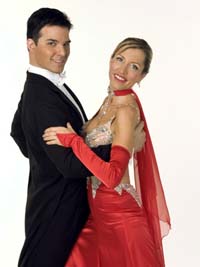 Heather Mills booted from 'Dancing With the Stars'

"We knew we were going out," said the estranged Mrs. Paul McCartney when she learned her fate. "We were in the bottom two last week. We're not surprised."

She said her participation on the program "raised a fortune for our charity, and hundreds of thousands of animals' lives will be saved." Mills donated her performance fee to an animal-welfare charity.

She was the first contestant with an artificial limb to compete on the ABC dance-off. Mills lost her leg in a motorcycle accident in 1993.

Her performance of the paso doble impressed the judges, with one saying Mills had "great passion and fire." But it failed to dazzle fans, whose voted are combined with judges' scores to determine which couple will be eliminated each week.

Tuesday's results show also included an appearance by Joss Stone, who performed two songs: "Super Duper Love" from her 2003 debut, "The Soul Sessions," and "Tell Me About It," from her latest album, "Introducing Joss Stone."

Members of the "Dreamgirls" cast performed "Steppin' To The Bad Side," a song and dance number from the hit film.

All seven couples also performed a group routine, a swing dance to the Stray Cats song "Rock This Town."