Thai tennis player Paradorn Srichaphan hasn't had much luck on the courts lately but he found his perfect match in former Miss Universe Natalie Glebova - and the two plan to marry later this year. 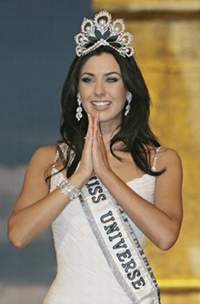 The pair announced their engagement at a joint news conference Tuesday attended by both sets of parents in the ballroom of a Bangkok luxury hotel, where the Canadian beauty queen was glittering with diamonds.

Glebova, who was crowned Miss Universe in 2005, sported a 3-carat engagement ring. And the bridegroom's parents presented her with a 16-carat diamond necklace-earring set that Paradorn put on his fiance with shaking hands.

"I'm a bit nervous," Paradorn confessed, adding that he hadn't slept the night before. "For a man to decide to have a family, it's a one-time decision and a big one."

But the 28-year-old tennis player added: "This feels right. We share the same passions and really understand each other."

The pair met at the Thailand Open in September when the 25-year-old beauty queen congratulated Paradorn for his quarterfinal win over Britain's Tim Henman by giving him an on-court peck on the cheek. The kiss was captured by photographers and splashed across front pages, prompting media speculation and nationwide interest. Paradorn went on to lose in the next round.

The pair insists that sparks didn't fly until their second meeting at a subsequent charity event for AIDS victims at a Buddhist temple in central Thailand.

"He's very down to earth and humble, and most importantly I could see that he has compassion and a great heart," said Glebova, dressed in a strapless, ankle-length yellow dress. Her parents had flown in from Canada to attend the news conference.

Looking at her fiance as she spoke, she said she did not hesitate when he proposed: "It was a feeling that came straight from my heart, and I know 100 percent without hesitation that I love him."

Paradorn proposed on April 13, the traditional Thai New Year, while the couple was vacationing in Bali. He told reporters he dropped to one knee and popped the question during an evening stroll.

The wedding date has not yet been set, but it is expected to be held in November or December in Thailand, Paradorn said, adding that the pair planned to wait a few years to have children.

He said he has no plans to quit professional tennis.

"I will continue to play after I settle down, because tennis is my passion," said Paradorn, who is currently ranked 82nd. He has won five career titles but none since 2005.

Glebova was crowned Miss Universe in 2005 when the pageant was held in Thailand and subsequently returned to the Southeast Asian country, where she now lives.