Erik Estrada gets star on Hollywood Walk of Fame

Erik Estrada received a star on the Hollywood Walk of Fame. 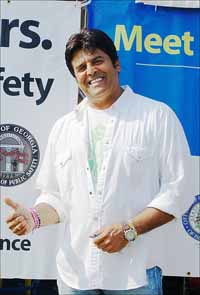 Erik Estrada gets star on Hollywood Walk of Fame

Estrada, 58, said his appearance on "CHiPs' satisfied two of his dreams.

"One, of course, a certain amount of success in the entertainment business, for which I really am extremely grateful and I'm very proud," Estrada said. "But equally important, it represents my childhood dream of becoming a police officer."

Estrada recently became a reserve officer for the Muncie Police Department in Indiana as part of his participation in the CBS reality television series "Armed & Famous."

The show was canceled in January.