Nude Kate Moss's photos to be sold at auction

Nude photographs of Kate Moss will be sold at an auction next month among a series of other pictures of the British model. 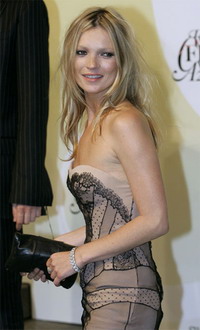 Nude Kate Moss's photos to be sold at auction

The photos will be auctioned in London on May 31.

An unpublished photograph, being sold by one of Moss' friends, is expected to sell for 6,000 pounds (US$11,949, 8,818 EUR). The portrait, taken by photographer Corinne Day in 1990, was shot in London two years after Moss was discovered at a New York airport at age 14.

Yuka Yamaji, head of photography for the auction house, called Moss "a cultural icon and arguably the most influential model of our day."