Bollywood actress Tabu describes herself as a fun-loving person, completely different from the characters she plays in Indian movies. 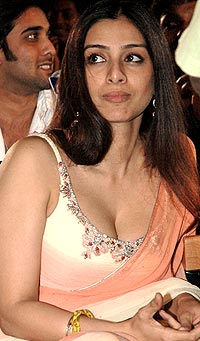 Tabu, who uses only one name, is a well-respected actress in Indian cinema who currently stars in "The Namesake," a movie about an Indian family's assimilation into American culture.

Tabu has won several national awards and acted in more than 50 movies since the 1990s, including many art house films.

"The Namesake" shows off Tabu's range as she grows from a shy, young immigrant bride who joins her husband in the United States to a confident mother living in a foreign land and, finally, to a widow in her adopted country.

The movie, released last month and directed by Mira Nair, is based on a novel by Pulitzer Prize-winning author Jhumpa Lahiri.

Tabu says she does not like being labeled a serious actress.

"Once in front of the camera, every person is an actor, so there is no need to label someone as a meaningful cinema actor or actress," she said.