Champ, the horse, just wanted a drink from the creek when he got that sinking feeling. 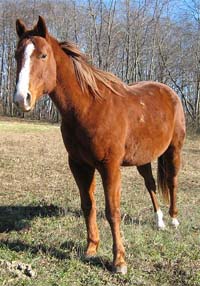 It took a backhoe and a team of rescuers to dig through the muck and haul the 1,200-pound (545-kilogram) horse to safety Thursday afternoon.

Champ had worn himself out trying to escape the mud that sucked him in up to his belly by the time his owners discovered him in the morning.

"It was like quicksand out here," said Champ's owner Jeff Radabaugh. "We dug until we couldn't dig anymore."

Radabaugh said he was able to get another horse out of the mud easily, but Champ would not budge.

Firefighters and police were summoned to help. Neighbors and other volunteers also showed up to haul buckets of mud from around the horse which appeared to be nearly on its side as it struggled to get out.

Ropes and straps eventually were put around the horse to lift it out of the mud.

"It was wild," said Dawson Police Chief Nicole McMahan. "That poor horse - if all those people hadn't showed up to help - he surely would have perished."

She said Champ remained mostly calm throughout the rescue efforts, helped in part by a sedative administered by the veterinarian.

"Every now and then he would give you that little ninny," McMahan said. "He knew everybody was trying to help him."

Dawson is about 65 miles (105 kilometers) south of Dallas.