California middle school banned an award-winning memoir about growing up poor and black in apartheid-era South Africa after a parent complained about a two-paragraph scene of men paying hungry boys for sex. 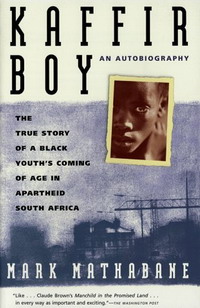 Burlingame schools Superintendant Sonny Da Marto ordered a teacher to stop using "Kaffir Boy" in her English classes even though a literature review committee composed of parents, teachers, a librarian, a student and a school board member had approved the book, the San Francisco Chronicle reported.

"The kids were angry," Amelia Ramos, whose four classes were about halfway through the memoir, told the Chronicle. "They were frustrated. They were appalled."

Da Marto told the Burlingame school board he would allow an abridged version of "Kaffir Boy" to be taught, but that the paragraphs depicting child prostitution were inappropriate for 13- and 14-year-olds. The school board declined to reverse his decision.

"I'm very concerned about the morals of our society and that children who don't have support are not prepared emotionally to read it," the superintendent told board members on Tuesday.

In "Kaffir Boy," published in 1986, Mark Mathabane tells a personal story about his upbringing in South Africa as one of nine children during the 1960s and 1970s. Mathabane recalls being offered all the food he could eat if he went to a hostel to play games with the migrant workers who lived there.

He describes seeing other boys, some as young as 5 years old, stripped naked for sex before he fled.

The American Library Association included the "Kaffir Boy" on its list of "Outstanding Books for the College Bound." The child rape scene also gave the memoir the No. 31 spot on the association's list of the 100 most frequently banned or challenged books.