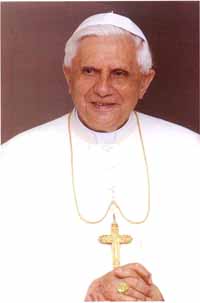 The EUR1 (US$1.34) stamps feature a smiling likeness of the German-born pope clad in a crimson robe and white skullcap, with a golden cord bearing a crucifix around his neck and St. Peter's Basilica and the Vatican crest in the background.

Austria Post AG said it expects the special issue of 500,000 stamps, which were going on sale later Thursday, to sell out well before Benedict's birthday on Monday.

The pope visits overwhelmingly Roman Catholic Austria in September, when his pilgrimage will include stops at a popular shrine in Mariazell and a Mass at Vienna's central St. Stephen's Cathedral.