John Lennon's piano, on tour as a symbol of peace, was put on display outside the front door of the Texas prison where an execution took place in the nation's most active death penalty state. 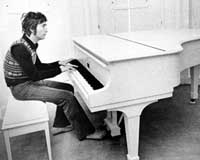 "What this guy did was violent and the death penalty is violent," Caroline True, creative director for a possible book and documentary about the piano and its travels, said as Texas corrections officials prepared to execute James Lee Clark.

Clark was condemned for the rape and fatal shooting of a North Texas high school girl in 1993. Clark's lethal injection on Wednesday evening was the 12th in Texas this year, accounting for all but one of the country's executions so far this year.

"The best way to do this is quietly, unobstrusively," True said of her presence. "We don't want to upset anybody."

Lennon composed his 1971 song "Imagine" on the Steinway upright piano, which was purchased by pop star George Michael in 2000 for $2.1 million. A co-owner is Michael's partner, Kenny Goss, who owns an art gallery in Dallas. True estimated the piano's value at between $8 million and $10 million ((EUR5.96 million to EUR7.45 million).

"We're just trying to say there's so much violence in the world, that it's senseless," True said. "What we're doing, the piano is a symbol of peace. It's as simple as that. We're taking it to places where extreme situations of violence have occurred and taking a picture of the day of or the anniversary of."

After being photographed on the street outside the entrance of the Texas Department of Criminal Justice Huntsville Unit, where 390 inmates have preceded Clark to the death chamber since 1982, the piano was rolled down the street to an area where a handful of protesters normally gathers.

It is not the first, or last, Texas stop for the golden-colored wood piano, which is being photographed at each site.

The first was Nov. 22 in Dallas to mark the anniversary of the 1963 assassination of President John F. Kennedy. Another Texas stop is planned for outside Waco at the site of the burned Branch Davidian compound.

The piano also has been to Memphis to mark the anniversary of Martin Luther King Jr.'s slaying. Other planned stops include Oklahoma City, where the federal building was bombed, and the site of the World Trade Center in New York.

"We're just making a very simple statement: Imagine all the people living life in peace. You may say I'm a dreamer but I'm not the only one," True said, reciting a line from the song. "All you need is that verse."